Skip to content
For centuries, universities and colleges have set up endowments funds to provide a perpetual source of support for the operating needs of the institutions.  This support provides funds for functional and critical areas including scholarships, academic activities, public service and research. In the event of budget reductions due to economic downturns or some other financial crisis, endowments provide institutions with a safety net to weather these financially traumatic periods.

While the value of endowment funds in the UK managed by Cambridge and Oxford Universities stood at GBP2.7 billion as at 2016, the size is much more significant in the US, with 805 endowments collectively valued at USD515 billion. Harvard University is claimed to possess the largest endowment fund in the world, with its funds under management valued at USD37.5 billion.

In Malaysia, Bernama reported that 20 public universities collected a total of RM1.87 billion as at August 2017, with University Malaya (UM) recorded the highest collection of RM1.6 billion followed by Universiti Kebangsaan Malaysia (UKM) at RM71 million. This effort is in line with the Malaysia Education Blueprint 2015-2025 that outlined ten shifts to spur continued excellence in Malaysia’s higher education. Shift #5: Financial Sustainability aims to ensure the long-term financial sustainability of the higher learning institutions by generating income through the mechanisms among others, the endowments and waqf.

The critical role of endowments and waqf is documented in the University Transformation Program Purple Book: Enhancing University Income Generation, Endowment and Waqf (Purple Book) published by the Ministry of Higher Education in 2016. This Purple Book laid out the best practices for universities in Malaysia to set up their endowment and waqf funds for income generation. In addition to that, the Purple Book also serves as a relevant guide to navigating activities specifically on fundraising, engagement with endowment/waqf donors as well as investment and asset allocations of the endowment and waqf funds.

At IIUM level, the IEF Division was set up and the IIUM Majlis endorsed its establishment in its 48th meeting on 15th March 1999. Given the importance of the IEF in supporting functional and critical areas carried out by IIUM including scholarships, academic activities, public service and research, it is essential to ensure on its sustainability to be the source of income generation for IIUM to continuously provide high quality tertiary education. 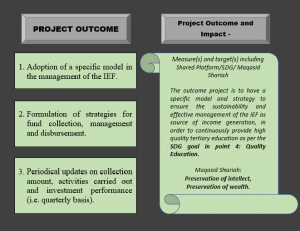