The purpose of the trip is to appreciate and partake in an effort to conserve, preserve and embrace cultural heritage of islamic Aceh Sultanate relics by involving in a historical discovery alongside the Acehnese non-government organisation that concerns with islamic historical civilization. Three academia from the campus, made up of college principal, program advisor and fellow were also involved in the remarkable 4 day volunteering trip to the northwest Indonesia Province of Sumatra Island.

On the day of the arrival, the program kick-started with an intellectual discourse titled Seminar Dakwah and Tamadun Aceh-Pahang which took place at Aula Fakultas Adab dan Humaniora, UIN Ar-Raniry. Among the panel of speakers who were involved in the discussion, Drs Nurdin and Dr Manan, academia from the university itself and Dr Mohd Affendi from IIUM Kuantan Campus.

The volunteering participants then made their way to Kampung Ulee Tuy, Darul Imarah Bandar Aceh where tombstones believed belonging to the rulers during the era of Menteri Penghulu Fawas Maharaja Setia were situated. Here, the volunteers involved in a cleaning and excavating activity to search for missing tombstones that were buried in the village vicinity. The participants managed to experience the process of unearthing and conserving the ancient gravestones which have been presumably existed ever since the 16th century of the Aceh Sultanate.

“Fakulti Adab dan Kemanusiaan” of the Islamic State University of Ar-Raniry Banda Aceh in collaboration with Kulliyyah of Allied Health Sciences (KAHS), International Islamic University Malaysia (IIUM) Kuantan, Pahang, held a “Seminar Da’wah dan Tamaddun Aceh-Pahang” on Friday (23/8/2019) at the “Fakulti Adab dan Kemanusiaan” Auditorium at the local campus. This seminar is in conjunction with IIUM flagship hosted by KAHS which is known as Health Information and Knowledge from Malay Medical Manuscripts (HIKAM).

This seminar is one of the “Jelajah Tamadun Islam Aceh” program initiated by the IIUM. In addition to the Malaysian delegation of about 30 people, the seminar included UIN campus residents, alumni and other UIN guests.

According to Abdul Manan, this activity is the platform to develop the faculty. He hoped that the activities would be followed by other activities to enhance cooperation between the “Fakulti Adab dan Kemanusiaan” of U-Ar-Raniry with IIUM Kuantan, Pahang.

“In the future, it is hoped that this collaboration and good relations will be further developed in other forms of academic activities such as student exchange, community service, scientific paper publishing and collaborative research,” Abdul Manan said in a speech on Friday (23/8).

The event organized by Hermansyah, a lecturer in Philology at the “Fakulti Adab dan Kemanusiaan” at UIN Ar-Raniry has gathered speakers from both universities.

As we know, the relationship between Aceh and Pahang has been around since the time of the Aceh Sultanate during the reign of Iskandar Muda. He brought many people from Pahang to Aceh and one of them made Sultan Iskandar Tsani his adopted son and married his daughter Sultanah Shafiyatuddin to Tajul Alam.

The purpose of the booth was to create awareness about the value of Malay Medical Manuscripts (MMM) among the visitors. Explanation from personnel have opened some of the visitors on the importance to study the manuscripts which is one of the main objectives of this flagship.

Among activities at the booth was rearranging words written in old “Jawi” which was proven to be challenging. There was also crossword puzzles pertaining to MMM for the crowd to test their Malay history knowledge. Several books on MMM were sold at the booth and some were written by the flagship leader. The exhibited medicinal plants also managed to grab the attention of the crowd.

In short, the event managed to attract a large crowd into IIUM and that made the booth reach its target to create awareness among the visitors.

The volunteering participants made their way to Kampung Ulee Tuy, Darul Imarah Bandar Aceh where tombstones believed belonging to the rulers during the era of Menteri Penghulu Fawas Maharaja Setia were situated. Here, the volunteers involved in a cleaning and excavating activity to search for missing tombstones that were buried in the village vicinity. The participants managed to experience the process of unearthing and conserving the ancient gravestones which have been presumably existed ever since the 16th century of the Aceh Sultanate. 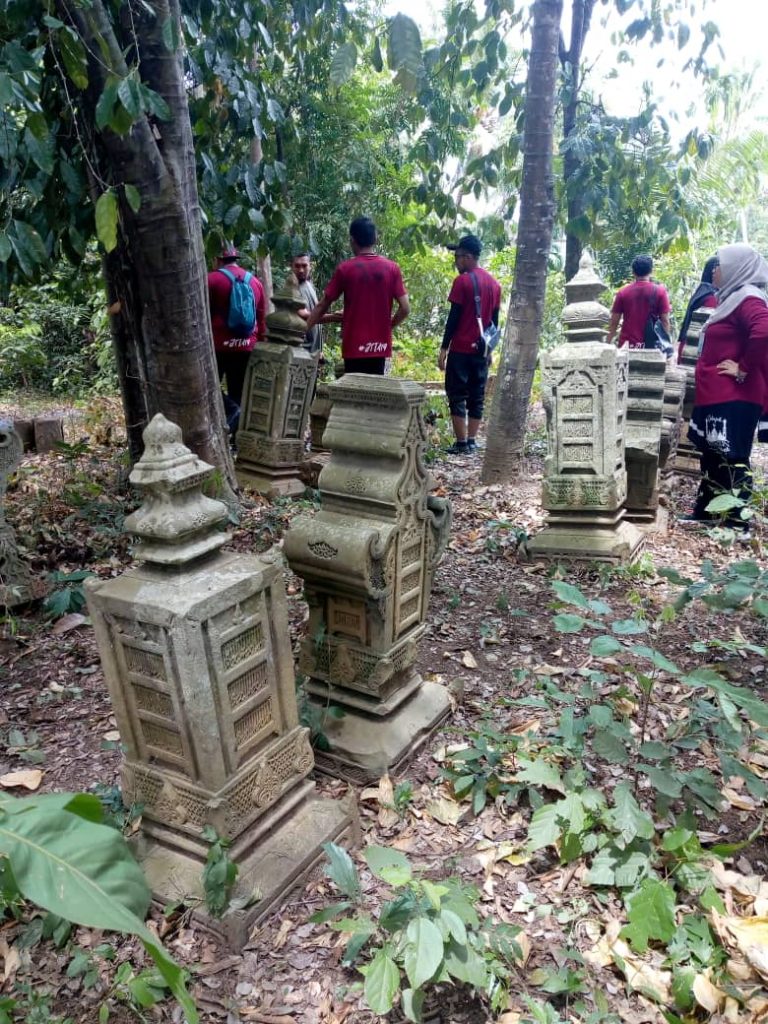 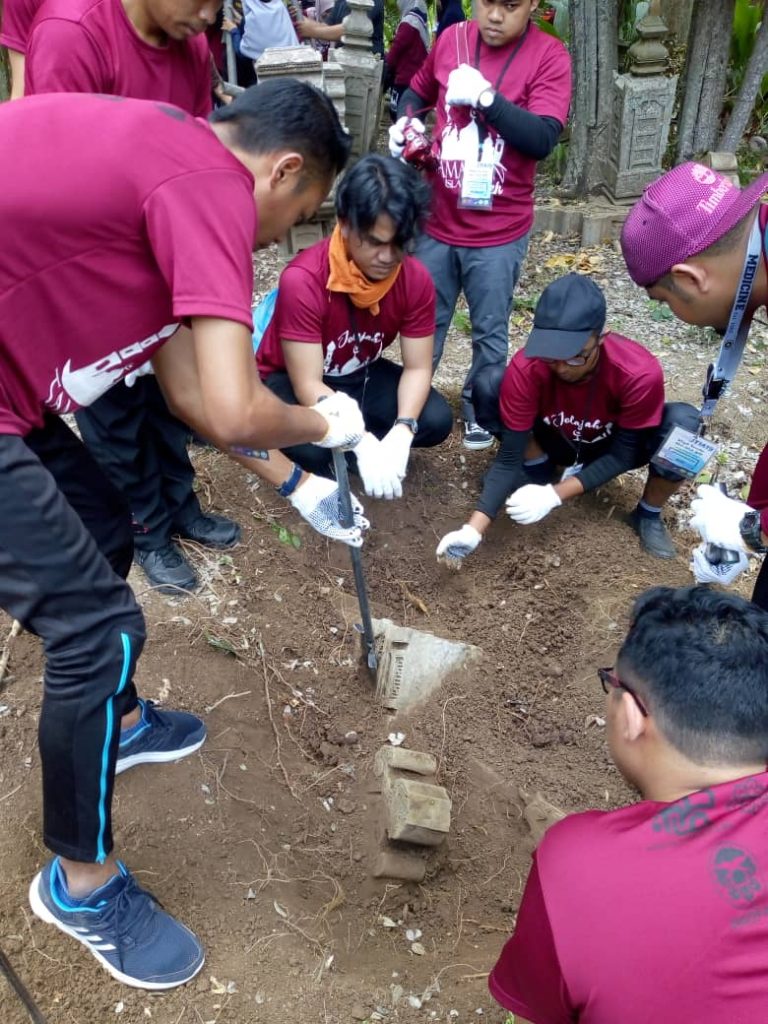 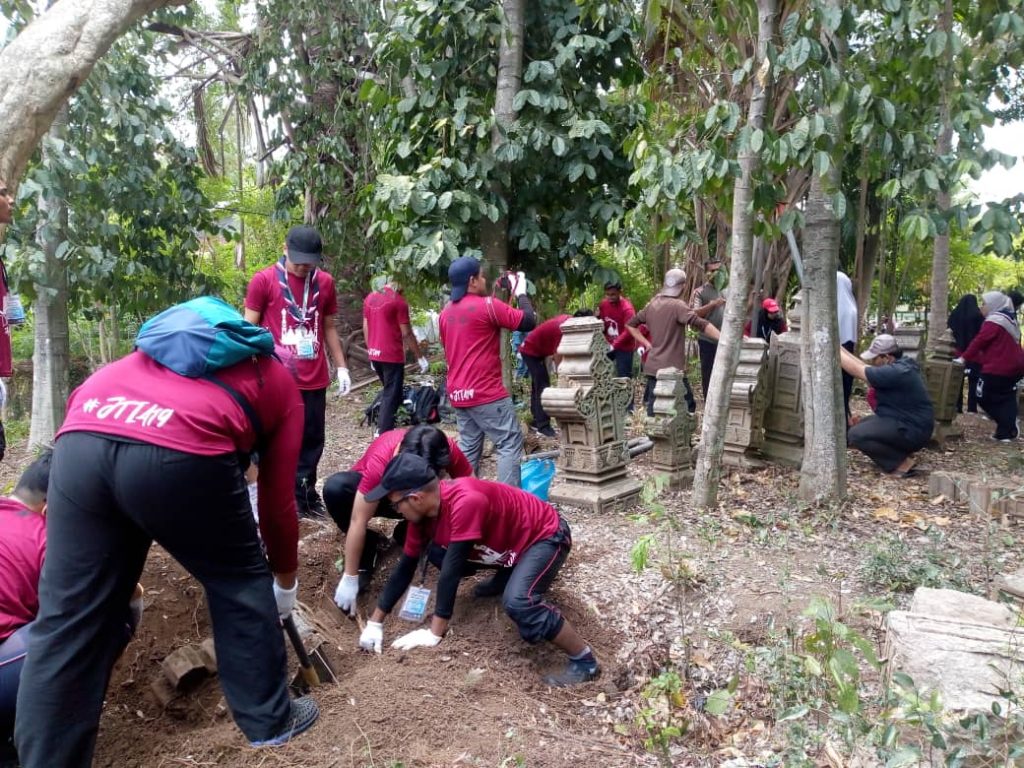 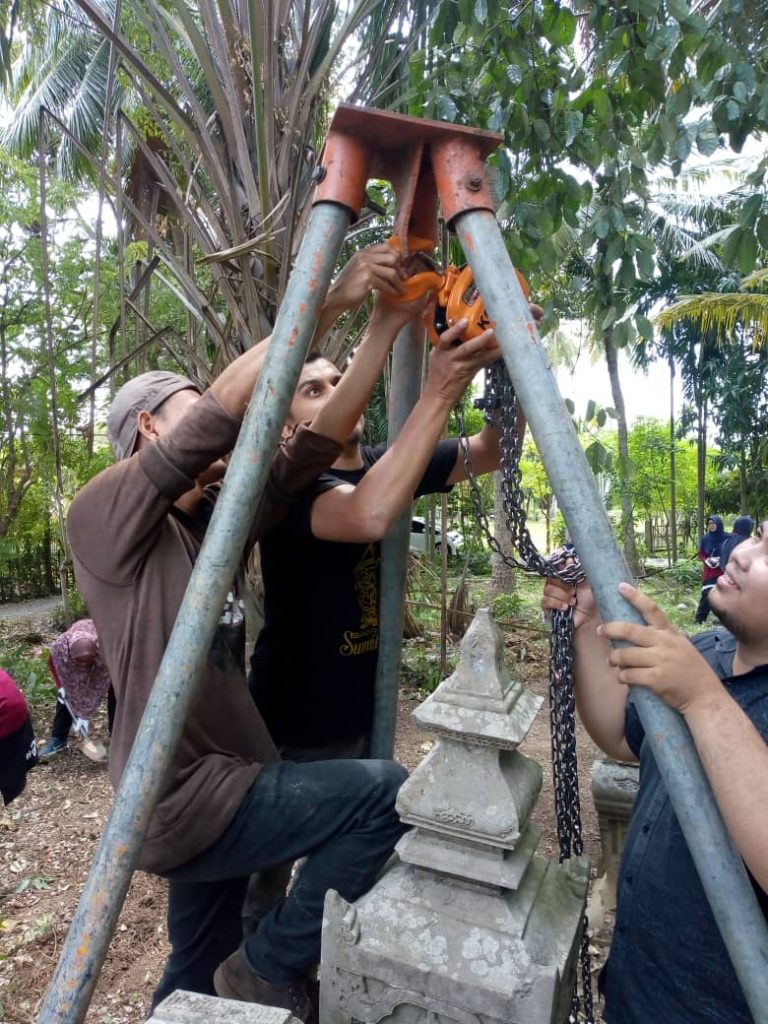 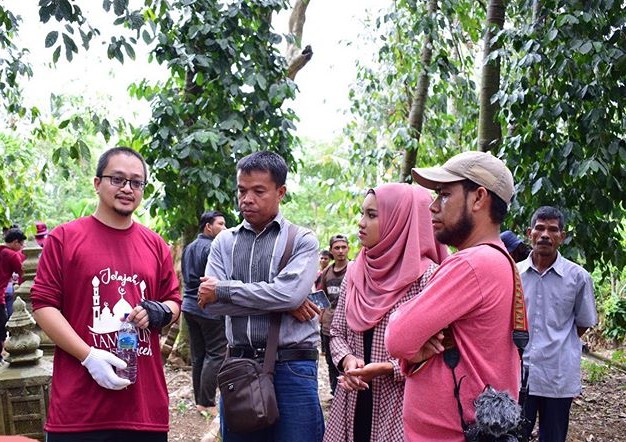 On 1 & 2 August 2019, Malay Medical Manuscript as Sources of Knowledge (IIUM flagship hosted by KAHS) organised a workshop on “Jawi” Transliteration. The workshop was participated by 25 staff and the sole presenter for the workshop was Asst. Prof. Dr. Mohd Affend Mohd Shafri who is also the flagship leader.

The two-day programme discussed about the vision and mission of the flagship, Malay medicine, research on Malay Medical Manuscripts from modern science perspective, aiding tools for “Jawi” transliteration, origin of Malay, civilisation and history of Malay, and scholars in Malay civilisation.

The participants were given a chance to have hands-on experience on how to read Malay Medical Manuscripts which require various skills. In the end, the participants presented their transliterated manuscript to the members of the workshop.

It was indeed a fruitful workshop and worth the two days. This is a starting point of the flagship to instill the enthusiasm and awareness especially among IIUM researchers to start looking at our forgotten treasure which are slowly decomposing. To let those be decomposed without harvesting the information contained, it is a great loss for the nation.